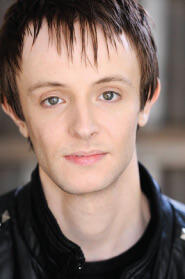 From dusk to dawn and day to night, the sky is always changing, constantly bridging the gap between light and dark. Why would its voice be any different? Like his namesake, LA-based voice actor Skylar Silverlake brings that same dynamism and reliability to every project he works on, as willing to embrace the darkness as much as the light. Specializing in character voices since 2007, Skylar began his voiceover career doing online independent video games and radioplays in addition to reading books for the blind. Before moving to LA in late 2016, he was a regular performer for the KTDT Players, a professional audio drama troupe based out of an actual physical radio theater in Sacramento, where he was able to hone his skills in a wide variety of productions.

Skylar’s naturally youthful but distinctly edgy sound ranges from casual-cool to upbeat to intense, with a mature, professional sensibility that makes him particularly well-suited for video games and dramatic animation. Despite drama being his particular niche, he definitely enjoys the occasional splash of more light-hearted cartoon fun on the side. In terms of commercial work, his intimate, reassuring tone is ideal for medical/health care spots, while his casual vibe is a natural fit for fast food and gaming commercials.